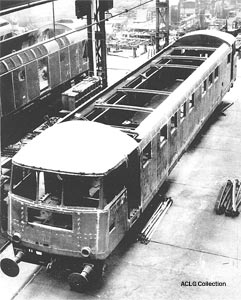 The order for the first 25 locomotives for the West Coast Main Line electrification was given to the British Thomson-Houston division of AEI (Associated Electrical Industries) in 1955, who subcontracted the mechanical construction to the Birmingham Railway Carriage and Wagon Company, of Smethwick, Birmingham. As originally planned AEI was to deliver 20 Type A (mixed traffic) and 5 Type B (heavy freight) units, but this was later amended to 23 Type A and just 2 Type B. The original number series was E3001-E3023 (A), E3301-E3302 (B), though within 2 months of delivery, E3301 was renumbered E3096, while E3302 was delivered new already renumbered as E3097.

The first of the class, and the first new AC electric to be delivered was E3001 in November 1959, allocated to Longsight (9A), Manchester. Delivery of the rest of the class was protracted with the last loco, E3097, not entering traffic until February 1964. The class was reallocated to the general code of "AC Lines" following the official inauguration of electric services. This "allocation" covered the depots at Longsight, Crewe and Allerton (Liverpool), with Crewe as the main depot. When the code was abolished, the class came under the direct jurisdiction of Crewe. Three Class 81s were withdrawn before the TOPS numbering system was implemented in 1972. E3009 was written off in the Hixon level crossing accident on 6th January 1968, when a lorry carrying a heavy transformer became grounded across the running lines. E3002 and E3019 were withdrawn after suffering severe fire damage, believed to be caused by placing the master control lever in reverse while the locomotive was still moving forward. This caused the traction motors to regenerate and overheat, and the resultant fire spread to the rest of the locomotive. Following these and similar incidents on other early locomotives, the master controllers were modified with an additional safety switch to prevent any recurrence.

In 1975 the class was transferred to the new depot at Glasgow Shields Road to coincide with the opening of the northern section of the WCML electrification. They remained allocated here until withdrawal in the late 1980s. The class, along with the other types, showed a tendency to catch fire in their final years, and this hastened the withdrawal of many of their number. In 1989, following the withdrawal of the last Class 83s from Euston empty coaching stock (ecs) duties, several Class 81s were put to use in their place. 81002 and 81004 were used at first, but were replaced in 1990 by 81012 and 81017. These last two were withdrawn themselves in July 1991, displaced by Class 85s, and were moved to Crewe to join the rest of the class, awaiting disposal. Of the twenty remaining locomotives, nineteen were sold to Coopers Metals for scrap by the end of the year, while one, 81002 was purchased by Peter Holt for preservation.