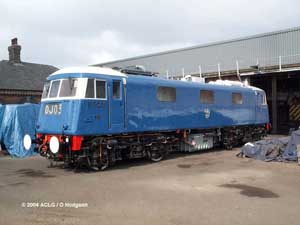 English Electric received an order for 15 of the 100 new locomotives for the West Coast Main Line electrification, which were designated Type AL3. Twelve Type A and three Type B locomotives were ordered, the first type As to be delivered being E3023 and E3024 in July 1960. Initially given the number series E3303-E3305, the Type B locomotives were soon renumbered E3098 and E3099, - E3305 (the last to be built) entered traffic as a Type A, numbered E3100, in 1962. This class proved to be the lightest, shortest and lowest powered of the five designs, but this had little impact on performance in the early years. Like Class 82, the AL3s spent their main-line careers allocated to Longsight, except for a brief period in the general allocation AC Lines.

English Electric had always been at the forefront of developing new technologies, and at their insistence, the British Transport Commission agreed to allow the last locomotive (E3305) to be built as a test-bed for Transductor Stepless Tap-Changer control. Financed mainly by EE, the loco was fitted with Silicon rectifiers (as opposed to the Mercury-Arc of the rest of Type AL3), rheostatic brakes and the new control system, and was used in tests for several years. Outshopped as a 100mph Type A loco, numbered E3100, its appearance was also non-standard, with the three corridor-side windows being replaced by louvres. Tests with this loco proved remarkably successful, and provided BR and EE with valuable knowledge for the development of future designs. Plans to take E3100 to Europe for comparitive tests with French, German and Swiss electric locos were proposed in 1963 and much development work on the loco was carried out, including a bogie swap with E3304 (which was then renumbered E3099 as a Type A machine), but the tests were cancelled, and nothing became of this interesing opportunity.

The early careers of standard Type AL3 proved rather more troublesome than that of E3100. Major problems with the water cooled Mercury-Arc rectifiers developed, resulting in the entire Class being withdrawn in 1969 and put to store. English Electric put forward several proposals to cure the problem, but it wasn't until the authorisation of the northern section of the WCML electrification that the plans were carried out, and Silicon Rectifiers fitted to the fleet during refurbishment at Doncaster in 1973-74. E3100 was also converted to a standard Class 83 at this time, not because of any failure as a test bed, but because very few drivers had been trained on it. As a consequence,it was non-standard and difficult to diagram for day-to-day operation. The class was renumbered into the 83001-83015 series, E3100 becoming 83015.

Unfortunately, refurbishment was not the end to Class 83's troubles. Problems with high-current contactors, together with a weight-distribution problem caused further modification work to be carried out. By the mid seventies, however, most of the problems had been ironed out, and the Class was operating efficiently.

Two Type AL3s were extensively rebuilt at Vulcan Foundry in 1965 after collision damage, with E3028 requiring a complete new cab assembly, while E3027 required work to both cabs and one side. E3027 had something of an unfortunate career, as after being renumbered to 83004, it collided with 47163 at Kensal Green Tunnel on December 24th 1977. The damage was so severe that it was withdrawn immediately and returned to Crewe in sections for component recovery. The other Class 83 to be withdrawn early was 83003, involved in a collision with 86209 at Watford in January 1975, writing off the 83 and leaving 86209 on its side at the bottom of an embankment. Both 47163 and 86209 were returned to service.

As a consequence of being low powered and few in number, Class 83 was withdrawn from main-line service in July 1983, along with Class 82. Two locos, nos. 83012 and 83015 were moved south to Willesden with 82005 and 82008, and put to use on empty carriage duties from Euston. A third loco, 83009, was converted to a static current converter at Longsight. This was to convert 25kV AC to 1500V DC for the maintenance of Class 506 1500V DC overhead electric multiple units, then still used on the Manchester - Hadfield/Glossop stub of the former Woodhead Route. These units were withdrawn in 1984 with conversion of the line to 25kV AC overhead, and 83009 was no longer required. Remarkably, it was sent south, returned to working order, and put to work on e.c.s. duties with classmates 83012 and 83015. The remainder of the class was sent for scrap at Vic Berry's yard, Leicester.