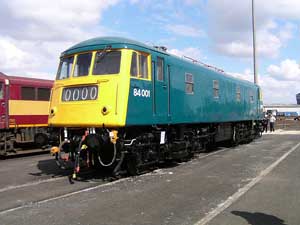 An order for ten locomotives was placed with GEC, who subcontracted the mechanical design and construction to the North British Locomotive Co Ltd of Glasgow. The AL4 type, as it was then known, was a little more distinctive in appearance than the other four types, the most obvious difference being the oval buffers in place of round. The first locomotive, E3036, was delivered to Longsight in March 1960, while the last, E3045, arrived almost exactly one year later. In the early years the locos were troubled by bad ride quality and also by the same problems that afflicted type AL3's mercury arc rectifiers. Differences in transformer and rectifier design between AL3 and AL4 meant that the rectifier problem was more serious on this type, and by 1963 the whole class was recalled for modifications.  In 1967, E3044 became the first AC electric to receive the new Rail Blue colour scheme (Rail Blue body, full yellow end and black underframe/bufferbeam), but within a year the whole class was again taken out of service and stored with the AL3s at Bury steam shed. The Corten steel locomotive body and the paint system used by NBL appears to have caused problems throughout the AL4s life, with large patches of paint frequently falling off the locomotive body. A number of the AL4s appear to have been repainted, E3036 and E3044 in particular being noted at Doncaster Works awaiting overhaul and carrying a livery of Rail Blue livery similar to that carried by the AL6s.

E3043 (later 84007) was used by Rugby Testing Station during this period, while E3044 was commonly exhibited at various rolling stock exhibitions around the country. Reprieved by the northward extension of the WCML electrification, the AL4s were refurbished at Doncaster and returned to service as Class 84 by the end of 1972. Unfortunately, the troubles were not over for Class 84. Tap changer failures together with traction motor failures resulting from years in storage caused the reliability of the Class to plummet. Work to correct these faults was initially successful,but the traction motors continued to fail and by 1976, BR curtailed any further large expenditure on the Class. Excessive wear on the axle drives caused the first withdrawals (a result of the curtailment of expenditure) and it was expected that the Class would be completely withdrawn by the end of 1978.

In the event, the last locomotives to be withdrawn were 84003 and 84010 in November 1980. 84010 had the distinction of hauling the Class 84 Farewell Tour which ran from Manchester to Glasgow via Northampton on 10 November 1979 and resulted in it being buffed up for the occasion. The same year, 84001 was loaned to the National Railway Museum to form part of its '100 Years of Electric Railways' exhibition. The original idea behind this move was that the loco would be returned at a later date in exchange for a more representative example of WCML traction (Class 86 or 87). Also in 1979, 84009 was transferred to the Research Department and converted into a 'Mobile Load Bank' numbered ADB968021 - a non-powered vehicle capable of drawing high current from the overhead line to simulate heavy use and thereby test equipment and power supplies.