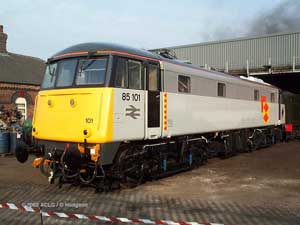 85006 represents the only one of the five early types to be constructed by British Railways itself, built at Doncaster Works. A successful design, the 85s survived in traffic until the early 1990s. 85006 was one of fourteen locos converted for freight-only use in the late 1980s, becoming 85101, and this was reflected in the colour scheme it carried from 2002 to 2013. Electrical and restoration work has started, and as the loco is virtually complete, it stands a good chance of running again.

As 85101 the locomotive was named "Doncaster Plant 150 1853 - 2003" at the Doncaster Works open days on 27th July 2003. The nameplates were removed immediately afterwards for safe keeping, and re-fitted on 30th April 2006. They were removed in 2012  while the for bodywork was prepared for repainting.

Forty new AC electric locomotives were ordered from British Railways Doncaster Works, together with forty sets of electrical equipment from AEI. With AEI having already supplied equipment for the AL1s and AL2s it was not surprising that much of it was standard with these types (particularly AL1), making a semi-standard fleet of 65 or 75 locomotives. The first AL5 to enter traffic from British Railways' Doncaster works was E3057 in the first week of June 1961. E3056 (numerically the first) did not appear for another two and a half months. E3057 was also the 51st AC electric to be delivered, thus marking the half way point for the initial orders. Deliveries of AL5s were spread over the next three years, with the last, E3095, going into traffic in the last week of 1964, only six months ahead of the first AL6 (Class 86). Initially the class was allocated to the general AC Lines code, and thereafter to Longsight, followed, in 1973 by allocation to Crewe Electric Depot.

Not having been plagued by the problems of earlier types, the AL5s led a fairly uneventful early existence. They differed from the other types by the addition of rheostatic braking (as applied to AL3 E3100), but this fell out of use until the late seventies when it was reinstated. Following repainting into standard Rail Blue, the class operated on classic mixed-traffic turns until the late eighties and early nineties, earning itself the honour of being "Britain's most boring class" at one point! Despite regular turns on anglo-scottish Inter City services, none were ever officially named, although 85030 was bestowed with the unofficial name "Fell Runnner" for a short time - an apt name for a locomotive which spent many years hauling trains across the fells of northern England and southern Scotland.

In 1989, Railfreight Distribution identified the need for more AC electric traction, and with late delivery of Class 90s, the decision was made to convert ten Class 85s to dedicated freight locos. This entailed removal of their train heating, reducing their maximum speed, and reclassifying as Class 85/1. The first loco chosen, no. 85006, was renumbered 85101 in 1989, with the remainder of the class following over the next few months. The locos suffered the same problems in later life as did the Class 81s, and fires were commonplace. Four further Class 85/1s were converted to replace locomotives so damaged. By the end of August 1991, however, the end was in sight for even these locomotives. A farewell railtour The Roarer Requiem, with 85101 and 85105 providing the traction, had already been run, and with the new Class 90/1s entering traffic the remaining 85s were finally withdrawn. Four locos were assigned to empty carriage stock duties (85101 and 85040 at Euston, 85110 at Liverpool Lime Street and 85018 at Manchester Piccadilly - 85113 later joined the Euston locos) but these duties were surprisingly short-lived, as by December 85101 and 85113 had been withdrawn, and the class had become extinct.

Almost the entire class ended up in Crewe's electric graveyard, where they remained for well over twelve months before disposal began. In December 1992, Pete Waterman purchased 85104 (previously 85012 and E3067) for preservation. This loco was returned, however, when Mr Waterman discovered that much of the internal cabling in this and other withdrawn locos had been attacked and destroyed since purchase - allegedly carried out by persons intent on the class not being returned to service in place of faulty Class 90s. Mr Waterman was able to acquire 85101 in its place however, and completely intact - apparently the perpetrator of the crime was on holiday!

The rest of the Class journeyed in groups of three locomotives to MC Metals in Glasgow for scrapping.

As E3061, 85101 entered traffic on 23 December 1961, allocated to AC Lines, the tenth AL5 to enter service. Originally painted "electric blue" with two pantographs, it was renumbered 85006 in 1974, gaining Rail Blue livery and losing a pantograph. The loco spent most of its working life on the varied duties offered by the West Coast Main Line, from heavy freights to InterCity passenger duties, although the latter became less frequent in later years.

It was chosen for conversion to the first of the dedicated freight sub-class 85/1, gaining its new number in 1989. In June 1991, 85101 hauled the outward leg of The Roarer Requiem farewell railtour from Manchester to Walton in Essex, and by August it had been downgraded to a 40mph empty carriage (ECS) loco at Euston. Withdrawal came in November and the loco returned to Crewe under its own power before being shut down for the last time.

Bought by Pete Waterman in 1993, it was intended that 85101 would be returned to working order for use on Waterman Railways special trains, but events overtook plans and no work was done on the loco before it was put up for sale. 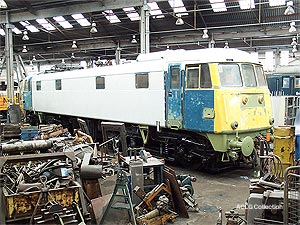 Purchased in 1997 by the AC Locomotive Group, the loco remained at Crewe pending possible electrical tests, which unfortunately didn't happen. The loco moved by road to Barrow Hill on 3rd May 2000, and received bodywork repairs in early 2001. Group members began a cab rebuild, with much work completed by the end of the year.

85101 received a complete cosmetic overhaul in 2002, being repainted into Railfreight Distribution livery at Barrow Hill. Towards the end of the year, electrical equipment restoration began with a view to returning the loco to working order.

In mid 2003 the loco's braking system was recommissioned in preparation for its special guest appearance at the Doncaster Plant 150 Open Weekend in July at Doncaster Works, where it was officially named to mark the Works's 150th Anniversary. In 2005 it visited Crewe Works Open Days before returning to Barrow Hill where it is currently on display.

Electrical restoration re-started in 2010 and continued into 2011, reaching the point where most of the electrical control equipment has been proven to work. Mechanical restoration and cosmetic work is continuing. The locomotive was moved by road in August 2013 to Boden Rail at Washwood Heath near Birmingham where the bodywork received Rail Blue livery and the former number 85006.