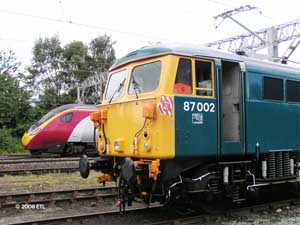 87002 represents the final type of locomotive built specifically for the West Coast Main Line: Class 87. The loco was acquired for preservation with the kind co-operation Romic UK. The locomitive was fitted with OTMR and main line registered, hauling its first test train on 16th July 2008.

The loco was named "Royal Sovereign" in 1978 and carried the name until 2003 when it was repainted into purple livery to promote its then owners, Porterbrook Leasing. It remained nameless until April 2005 when it was named "The AC Locomotive Group" at Wembley depot. It had the distinction of heading the last official Virgin West Coast diagrammed Class 87-hauled train with 87010 on 10th June 2005, and hauled the really very last Virgin diagrammed Class 87-hauled train on 22nd December 2006.

When the go-ahead was given to electrify the WCML northwards from Weaver Junction to Glasgow in the early 1970s, there was a requirement for more powerful traction to cope with the gradients north of Lancaster. An order was placed for 34 powerful, 5000hp Bo-Bo locomotives (later amended to 36 units) with electrical equipment from GEC. The Class 87s, as they were to become, were based closely on the preceding Class 86 (AL6) design in terms of equipment layout and overall appearance, but featured the loss of a route indicator box on the cab front, and two main windscreens replaced the three of all the earlier designs.

Prior to the construction of the fleet, three Class 86s were converted to Class 87 testbeds and numbered 86101-103. They featured the new BP7 bogies and Class 87 transformers, and had the 5000hp capability of an 87.

The locos were built by BREL Crewe between 1972 and 1974 with the first, 87001, entering traffic in June 1973 allocated to Willesden Depot in London. The fleet entered service gradually until the last 'standard' machine, 87035, was delivered in October 1974. The final locomotive, originally to be numbered 87036, but entering traffic as 87101, was built as a test bed for new electronic power control equipment, using thyristor technology to replace the tap-changer transformer and rectifiers. This loco appeared in 1975 and spent many months on test before entering regular use during 1976.

When new the fleet wore standard Rail Blue livery with full yellow ends. 87001 was the first of the class to be named, when it was fitted with the name 'STEPHENSON' in January 1976, the plates being presented by the Stephenson Locomotive Society. The following year, however, British Rail's naming policy changed and it was decided that the 87 fleet should become the new 'Royal Scot' class, with the locomotives named with an appropriate Anglo-Scottish theme. The 'STEPHENSON' plates were subsequently transferred to the Thyristor test loco, 87101, while 87001 became 'Royal Scot' in 1977. In 1984, 87006 and 87012 were selected to trial new liveries in advance of an improved 110mph service on the WCML. 87006 received a version of the large-logo livery, but with dark grey as the base colour rather than Rail Blue, while 87012 received a version of the APT-P livery, which became known as InterCity Executive livery. The latter scheme became the preferred option and the whole class (except 87101) received one or more versions of the InterCity colours in the pre-privatisation period.

Until the early 1990s, the 87s worked not only express passenger, but heavy freight services throughout the WCML area, regularly double heading steel and other commodities over the fells. Sectorisation eventually saw an end to this practice, with the InterCity sector gaining full control over the standard locos, and Railfreight taking on 87101. This loco received the railfreight Triple-Grey livery for a time in the early 1990s.

Following privatisation, the standard 87s became the property of Porterbrook Leasing and remained the principle motive power on Virgin West Coast services until 2003/2004, sharing duties with the Class 90s and some 86s. 87101 became the property of the English Welsh and Scottish Railway and saw use until 1998 when it was withdrawn.

With the introduction of new "Pendolino" units, 87s began to come out of traffic. 87016 had the dubious distinction of being the first 87/0 to be dismantled in November 2004.

2005 was the last year for intensive Class 87 use on passenger services, with a "Farewell" service operated on June 10th utilising a normal service train from Euston to Manchester, headed by 87010 and 87002. Meanwhile DRS took three locomotives on trial for freight use, however this was short-lived. GBRf also hired in locomotives to act as stand-by cover for Royal Mail trains.

The same year, both 87001 and 87035 were officially preserved, the former going to the National Railway Museum and the latter to Crewe Heritage Centre. 87031 was handed over to a training scheme at Tyseley.

Unexpectedly, in 2006, Virgin brought one Class 87 diagram back, covering for a shortage of Pendolinos. This London-Birmingham run lasted until 22nd December when 87002 hauled what turned out to be the very last 87-hauled scheduled passenger train.

Interest from abroad surfaced in 2006, resulting in 87012 and 87019 being exported in January 2007 to Bulgaria for trials with the Bulgarian Railway Company, an open-access freight operator there. In 2007 the only main-line UK use for the class was with GBRf who retained a handful of locos for mail standby duties; these ended on 27th December. A "Farewell" railtour planned for 29th December failed to run due to problems with the coaching stock, and with the deadline for non-OTMR-fitted locomotives passing on 31st December, the remaining 87s were withdrawn.

A deal was stuck to enable 87002 to remain in the UK for preservation, and it was handed over in April 2008. It was fitted with OTMR and main line registered, hauling its first test train on 16th July 2008. 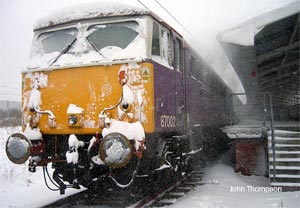 87002 was the second Class 87 to be built, emerging from BREL Crewe works in June 1973, nameless and painted in BR Blue livery. It was immediately allocated to Willesden depot in north London for use on passenger and freight services along the whole of West Coast Main Line from Euston to Glasgow.

In 1978 it received the name "Royal Sovereign" in line with the naming policy of the time, and carried this name for the next twenty-five years.

87002 remained a WCML machine for its whole working life, although it lost its freight duties upon sectorisation and became a dedicated 110mph passenger loco. It carried several versions of InterCity livery before privatisation saw it become the property of Porterbrook Leasing. It was subsequently repainted into the red and grey Virgin Trains scheme.

As the introduction of new trains on the WCML progressed, 87s saw less use, and the fleet's owner, keen to seek further use for the locos elsewhere, repainted 87002 into its house colour of purple, complete with a large silver "swoosh" logo on one side, and a large silver band with the word "PORTERBROOK" down the other side. Unveiled at the Crewe Works open day in 2003 to a mixed reception, the loco was immediately recognisable and became something of a celebrity with enthusiasts.

In 2004 Porterbrook, who then could foresee no future use for the class, began to invite expressions of interest in preserving examples of the class from museums and other interested parties. Naturally the Group noted its interest, and had a number of very positive and enthusiastic discussions regarding the eventual preservation of a locomotive in working order. Porterbrook's flagship loco, 87002, was an early contender due to its then relatively recent overhaul; one consequence of this choice was the subsequent naming of 87002 after the group in April 2005 - the first (and only) time that any locomotive preservation group has been so honoured!

87002 ran with the Group's name on the side until withdrawal in 2007, initially remaining with the Virgin Trains fleet where it had the dubious honour of heading the first official "final" passenger train, along with 87010, on 10th June 2005; and also the second official "final" passenger train, this time solo, on 22nd December 2006. Following its use with Virgin, it moved over to GBRf hauling Royal Mail trains from Glasgow to London for much of 2007.

By this time, however, the writing was on the wall. The whole remaining fleet was sold, 87002 included, and all British operations had to cease by 31st December, due to the OTMR regulations coming into force. 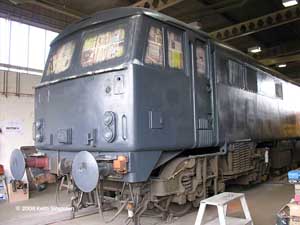 Following completion of a full E-exam and fitment of OTMR equipment at Long Marston, the loco was registered for main line running on 15th July 2008.

It successfully hauled its first test train from Crewe to Carstairs and return on 16th July 2008.

In Autumn 2013 the loco was fitted with GSM-R radio equipment. Also the loco's Air Blast Circuit Breaker was replaced with a Vacuum Circuit Breaker. These changes allow the loco to be operated on all sections of the 25kV electrified network.

During February-March 2015, 87002 visited the Wabtec (Brush) works at Loughborough for repainting into the Serco Caledonian Sleeper colour scheme.

Starting on 31st March 2015, 87002, with 86101, has been regularly hauling the empty coaches for Caledonian Sleeper workings between London Euston and Wembley Inter City Depot. For several weeks during April and May 2015, 87002 hauled the Highland Sleeper train between Euston and Edinburgh.

With the introduction during 2019 of the new Mk.5 Sleeper Carriages, which 86101 and 87002 cannot haul, there was no longer a requirement for these locomotives to be hired for the Serco Caledonian Sleeper workings. 87002's last Sleeper working was on 14th June 2019, when the loco worked 5M16 from Euston to Wembley Inter City Depot. 87002 was taken off hire in mid October 2019.

A number of avenues were explored across the UK industry in hope that further contracted work could be found for the main line fleet. As this became increasingly unlikely alternate options were considered. The priority was continued operation in the UK. On 5th November 2019 the sale of 87002 (and 86101) to Locomotive Services Limited (LSL) was announced with immediate effect.